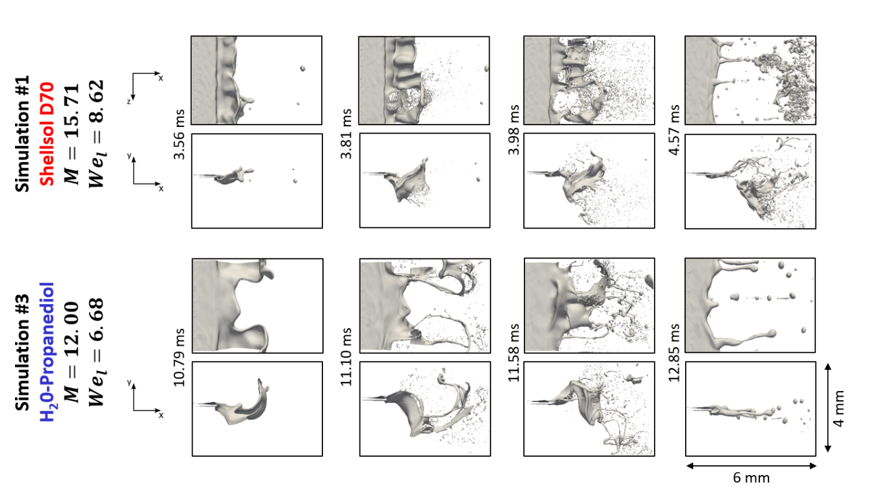 ESTiMatE researchers keep working on Direct Numerical Simulations (DNS) to predict the spray formation within prefilming airblast atomisers. The final objective of the activity is to derive a primary breakup model to couple with liquid spray Eulerian-Lagrangian Large-Eddy Simulations (LES) of the reacting flow to predict soot formation within spray flames in aero engines.

The research team from Universitat Politècnica de València (UPV) has already demonstrated success in predicting the primary atomisation mechanism of such atomisers for a reference operating condition (previous news here). The efforts then focused on studying the effect of the planar atomiser geometry (namely the atomizer edge thickness) and working conditions through the developed methodology.

As an example, Figure 1 shows the disintegration of the liquid film above the prefilmer into ligaments and droplets for two different fuels at the same operating condition. The studied fuels are Shellsol D70 and a H20-Propanediol mixture, the latter with a significantly greater density, viscosity, and surface tension. These variations in liquid properties are representative of those suffered by kerosene at different engine regimes.

The figure highlights that the primary breakup mechanism (bag formation, bag breakup, rim and ligament formation, and ligament breakup) remains the same. However, the higher density, viscosity, and surface tension of H20-Propanediol lead to a more extended intact core and larger ligaments that end up breaking into a lower amount of droplets, which are also larger than the ones found for Shellsol D70. The application of the developed post-processing techniques to the results also allowed stating that the H20-Propanediol film breaks up into ligaments at a lower frequency and results in a wider spray angle, its droplets traveling at a statistically slower speed. The lower momentum flux ratio and Weber number linked to the H20-Propanediol liquid properties are responsible for these findings.

Figure 1. Qualitative evolution of the spray in the ESTiMatE VOF-DNS airblast simulations for Shellsol D70 (top) and H20-Propanediol mixture (bottom). For each liquid, the top images represent a top view, whereas the bottom images represent a side view (flow travels from left to right). Gas velocity of 50 m/s, normalised volumetric flow rate of 50 mm2/s, atomizing edge thickness of 230 μm.

At the moment, UPV is working with the partners from Barcelona Supercomputing Center (BSC) to take advantage of these results to generate realistic boundary conditions for the spray in reacting flow simulations. These partners proposed a Lagrangian particle injection model that is now at its implementation stage. The task to be conducted by the end of ESTiMatE is the assessment of the validity of the model and its impact on spray flame simulations compared to traditional approaches based on predefined drop size and velocity distributions for the liquid injection.