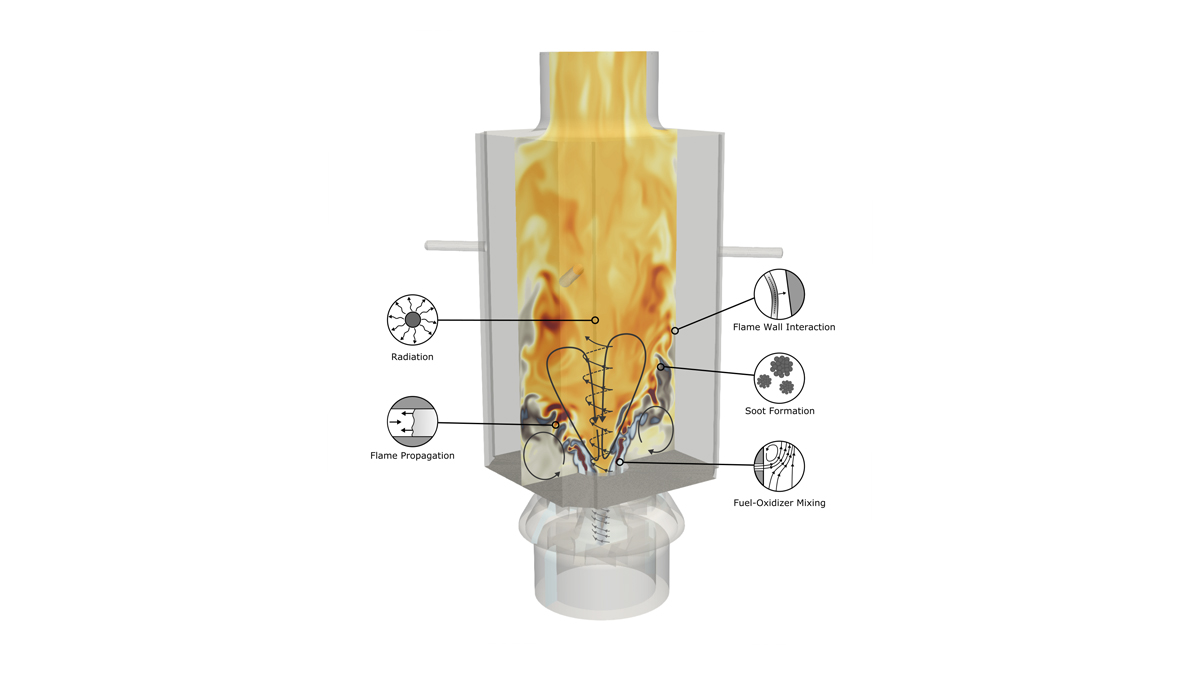 The research efforts in the field of combustion are addressed to develop new technologies for improving sustainability while the efficiency of combustion is preserved.

Soot or carbon particulate is released in the atmosphere by combustion in stationary and aero engine gas turbines, internal combustion engines, heating system furnaces and many other devices burning hydrocarbons. Soot is one of the causes of global warming as well as the accelerated process of ice melting. Furthermore, air pollution is strongly associated with an increased risk of developing severe lung and heart diseases because of particle inhalation.  Given the dramatic impact on the climate changes and the health implications, the primary goal of our research is to gain a deeper understanding of soot particle formation and growth pathways and exploring potential ways to control and reduce these processes. While soot research has been conducted for decades, there are many unanswered questions, especially related to particle formation at real engine operative conditions.

In the ESTiMatE project, we primarily focus on soot formation from kerosene combustion in aero engines.  In the next years, air traffic is going to increase and, for this reason, reducing the footprint of the next generation of aero engines is fundamental for our society. 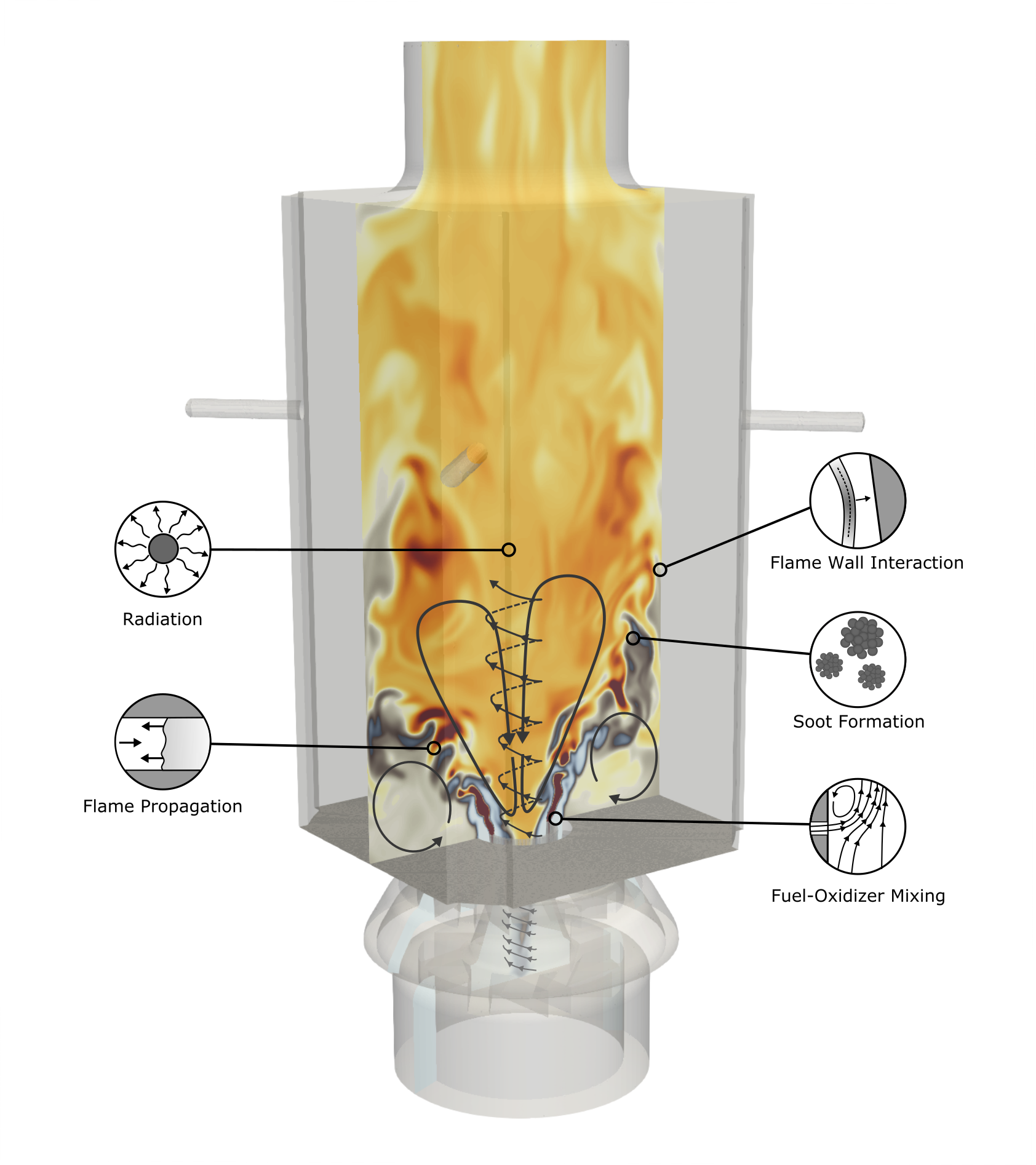 Both numerical simulations and experimental measurements are necessary to understand the complex physical phenomena taking place in aero engine combustors. Several processes, such as liquid kerosene injection, fuel droplets evaporation, turbulent fuel-oxidizer mixing, chemical reactions, soot formation, etc., and their interaction with each other, have an impact on combustor performance and emissions. Therefore, our research approach consists on investigating progressively complex configurations to isolate the different phenomena and their effects.

In ESTiMatE, a hierarchical series of numerical and experimental studies are planned, from laminar to turbulent opposite jet kerosene flames up to swirled flames and model combustors at elevated pressure. This will allow to improve the predictivity and the reliability of the soot model at aero engine conditions.

Two fundamental components are necessary for soot modeling: the gas-phase chemical kinetics and the statistical model for the soot particle evolution. These are interconnected as it is shown in the animated scheme below.

When complex hydrocarbons are burned, soot precursor species such as acetylene, ethylene and polycyclic aromatic hydrocarbons (PAH) are produced in abundance. If the Van der Waals forces are strong enough to hold together large PAH molecules, small soot particles are formed. These are essentially spherical and with a diameter smaller than 10 nm. Small particles can then grow via chemical pathways interacting with gas-phase species or through coagulation with other particles. When large particles are formed aggregation becomes more likely than coagulation and chain-like shaped soot particles are formed. Oxidation and fragmentation processes, initiated in presence of O2 of OH, can instead reduce the particle dimension. Through oxidation, the mass of the soot particles is reduced due to chemical reactions. The fragmentation is instead the break-up of large aggregates or soot particles in smaller structures. A detailed description of these two processes is crucial to obtain an accurate prediction of the soot particle evolution. Especially for complex fuel as kerosene at high aero engine operative pressure, this is still a big challenge and represents one of the main aims of this project.

Schematic overview of the formation and the oxidation of soot particles along a flame with  corresponding soot modeling approach. Video from Ferraro F. et al. (2020). Figure in the center from Salenbauch S. (2018)

Tracking soot particles individually is computationally unfeasible, even for large supercomputers. Therefore, a statistical approach is followed here where the particle number density evolution is determined. In the numerical simulations, a population balance equation for the particle number density is solved, whose evolution depends on the physico-chemical processes described above. A software package will be implemented with higher flexibility to be coupled with different CFD solvers used by the Consortium partners.

Two different valuable approaches are developed and applied in this project for solving the soot particle number density: the Quadrature Method of Moments by the Technical University of  Darmstadt (TUD), and the sectional method by the Eindhoven University of Technology (TUE) and Barcelona Supercomputing Center (BSC). The University of Stuttgart (USTUTT) is developing the kinetic mechanism for kerosene surrogates. Experimental measurements are performed at Karlsruhe Institute of Technology (KIT) and the Technical University of Berlin (TUB) to validate the model development. Advanced combustion models, based on both finite-rate chemistry and tabulated approach, are developed and coupled with the soot models within the project and their effects on soot prediction are analyzed in a joint collaboration between all the partners.  Furthermore, two-phase models for the primary spray breakup in gas turbine airblast injectors are developed by the Politechnic University of Valencia (UPV) and BSC.