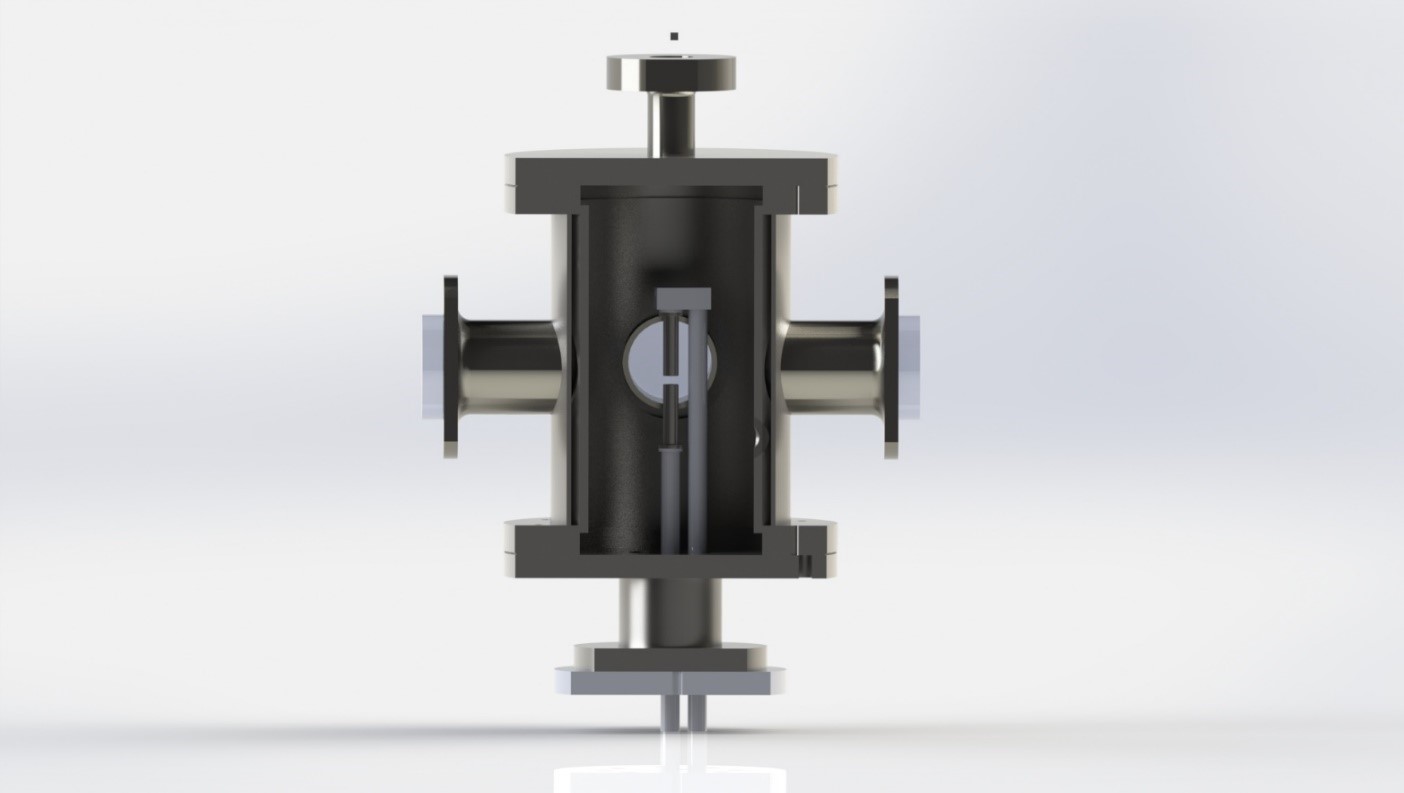 Within the EU-H2020 project "Emissions Soot Model" (ESTiMatE), a modelling strategy will be developed to predict carbon particle (soot) emissions from the operation of aircraft engines. This requires the improvement or development of sophisticated models for the relevant sub-processes and validation using reference experiments to ensure reliable prediction of soot emissions.  In this context, the Chair of Combustion Technology at the Karlsruhe Institute of Technology (ebi-vbt KIT) investigates laminar non-premixed counterflow flames of ethylene and kerosene-surrogates focusing on the processes that lead to soot formation. A series of measurement methods are used in order to determine flame characteristics like temperature, species and soot concentrations, as well as the size of generated soot particles. The main aim of the studies is to explain the influence of fuel composition and pressure on the flame structure, and particularly, on the formation of gaseous soot precursors (e.g. benzene, naphthalene, pyrene) and soot particles. Obtained data sets from the experimental measurements are also used for the validation of chemistry and soot formation/ oxidation models developed by other project partners.

For the needs of the experimental investigations a model counterflow burner is used [1,2], which has also been adapted for installation in a high-pressure facility (Figure 1a). This facility will enable flame investigations under higher pressures up to 10 bar. The burner itself consists of two opposed ducts. Fuel is supplied to the system from the bottom duct, whereas the oxidizer is supplied from the top duct. The two streams are flowing against each other and a non-premixed flame is stabilized between the two ducts (Figure 1b).

The fuels under examination include a kerosene-surrogate consisting of 4 components (n-dodecane, iso-octane, cyclohexane and trimethylbenzene), single components of the surrogate, as well as gaseous ethylene, which is a reference fuel as far as soot formation research is concerned. Currently, experimental investigations in atmospheric non-premixed flames are on-going and they focus on the determination of temperature profiles and species concentrations in flames of iso-octane, trimethylbenzene, and ethylene.

Temperature profiles are characterised with a constant tension fine-wire S-type thermocouple (Pt10%Rh - Pt) with 100 μm diameter wires. In order to minimize catalytic effects the wires coated with zirconia oxide. Measured temperatures are corrected for radiation losses according to [3] and the maximum uncertainty in measured temperatures is ± 80 K. Gas species concentrations in the examined flames are determined via gas chromatography using in-situ sampling with an aluminum oxide (Al2O3) probe (ID 0.3 mm / OD 0.6 mm, 25 mm length) as explained in one of the previous studies of our group [2]. Downstream of the sampling system the sample transfer line to the GC is heated to 150°C to avoid species condensation. The GC system consists of a TCD detector for detection of major species (H2, CO, CO2, N2, O2 and H2O), and of two FID detectors. One FID is used for detection of hydrocarbons up to C5, like CH4, C2H2, C2H4, etc., and the second one detects hydrocarbons with more than five C-atoms. As the focus of the measurements is on the detection of gaseous soot precursors, the developed measurement method detects and quantifies several relevant PAH species like benzene, ethylbenzene, indene, naphthalene, acenaphtylene and pyrene. Soot characteristics are investigated using laser-diagnostics. The laser scattering technique is used for the qualitative examination of sooting tendencies in the examined flames.  Quantification of soot volume fractions and particle size distributions is performed with the method of Laser Induced Incandescence (LII).

Exemplary temperature and species measurement results from atmospheric laminar non-premixed iso-octane flames are presented in Figures 2 and 3. Figure 2 presents temperature (a) and concentration profiles of major species (b) from a flame with a strain rate of 60 s-1 and fuel mass fraction in N2 of Yf = 0.35. The obtained data are compared with 1-D gas-phase simulations performed with the OPPDIF code of the CHEMKIN modelling package [4] using different kinetic models.

Unlike major species, higher hydrocarbons and soot precursors show significant differences between measured and predicted concentrations as shown in Figure 3. Discrepancies are also observed among predictions from the different chemistry models, highlighting the importance of generating experimental data under well-defined conditions. The studies will continue with measurements of the size and concentration of particles in sooting flames of ethylene, and of the kerosene-surrogate. The high-pressure facility will be put into operation within November 2020 and then investigations concerning the influence of pressure will start. 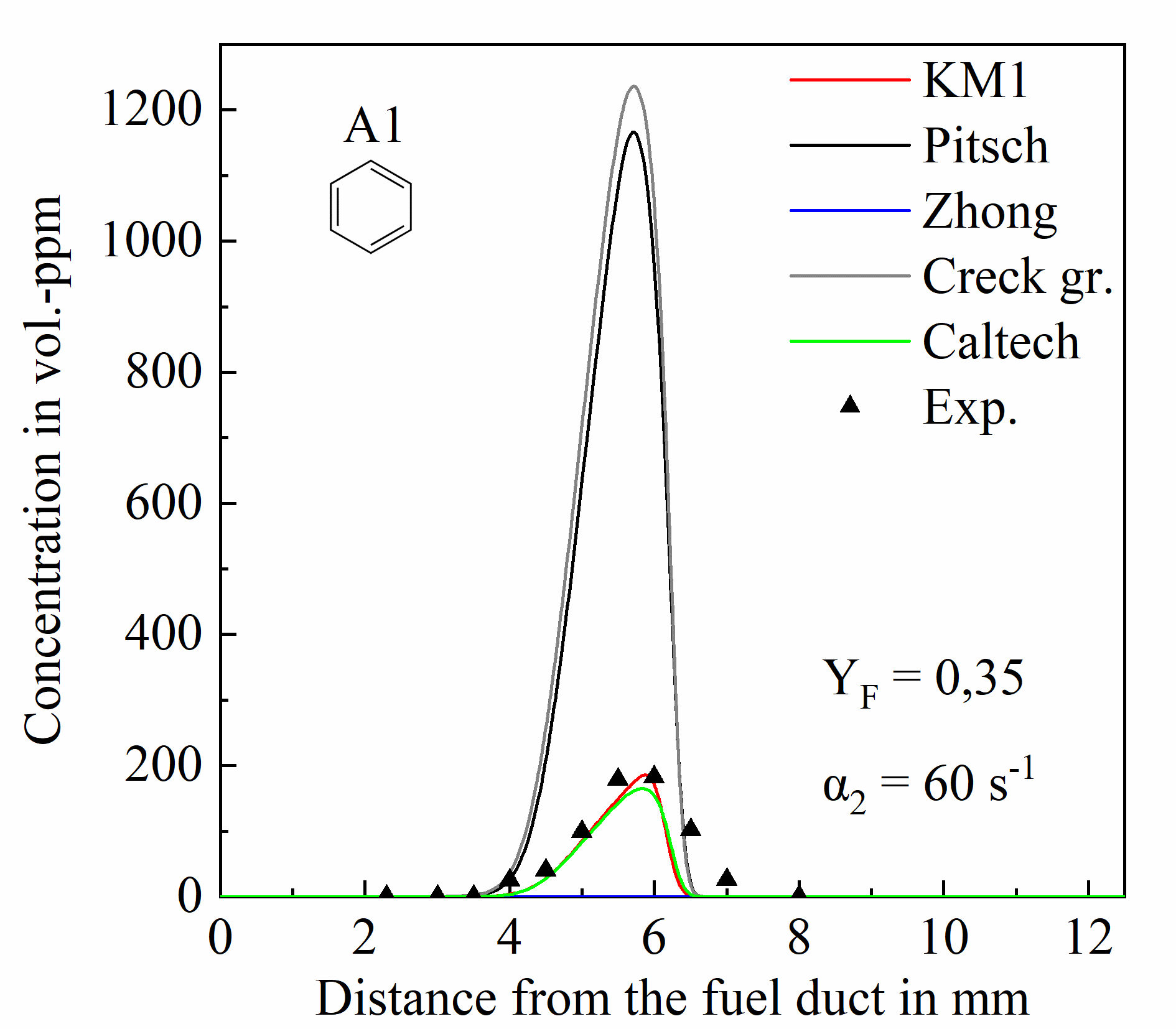